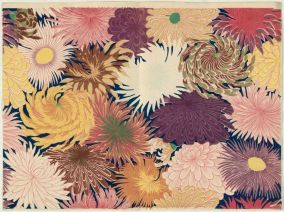 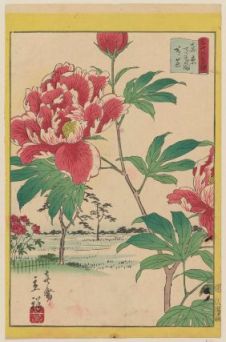 This past Sunday, the New England Chapter of the Society of Architectural Historians organized a walking tour of the sacred places of Beacon Hill.  The tour was well attended and the weather was fantastic, a better Sunday afternoon could not have been possible.

The tour was an excellent opportunity to learn more about the many sacred places in Boston’s Beacon Hill  neighborhood, especially since I had only seen the interior of one of them (the Vilna Shul synagogue) before this tour. Below are some images I snapped of some sites. 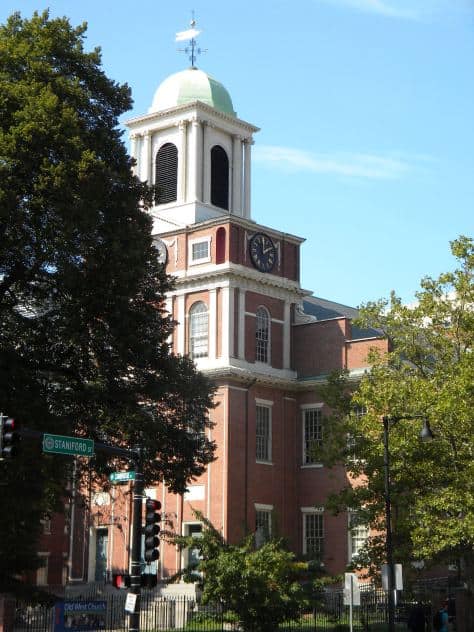 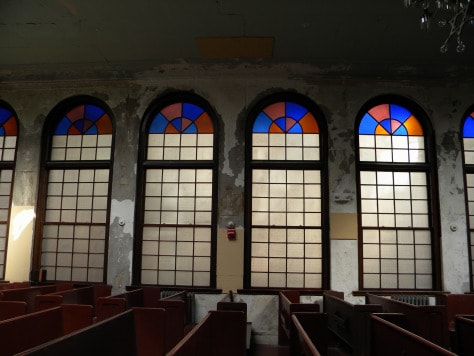 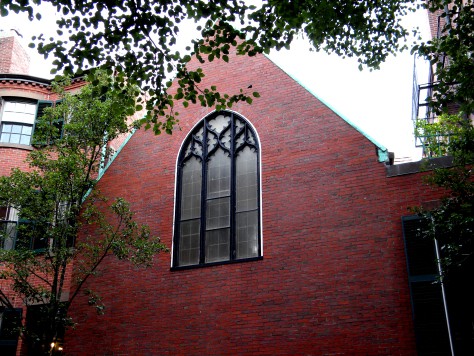 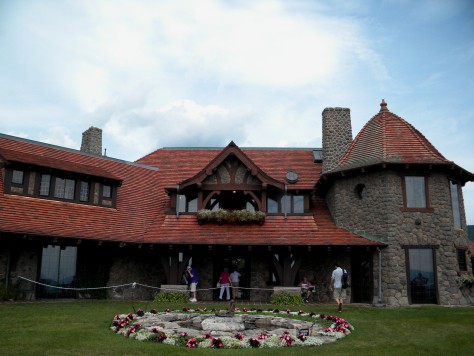 Ever since taking my first architectural history survey at the University of New Hampshire, I became fascinated with the Arts and Crafts Movement and the architecture of Henry Hobson Richardson.  I wrote my first paper ever, in any architectural history class on the libraries of H.H. Richardson and I am a docent at Trinity Church, one of Richardson’s masterpieces.  What’s the connection between the Arts and Crafts Movement, H.H. Richardson and New Hampshire, you might be wondering?

See, every summer I’ve made it a goal of mine to explore a historic house in the New England region and learn as much as I can from my visit. The past few summers, I’ve gone to Salem, MA, Newport, RI and most recently, New Canaan, CT to visit the Philip Johnson Glass House. This summer, I traveled to New Hampshire and visited Lucknow or “Castle in the Clouds,” a 16 room Arts and Crafts Mansion situated atop one of New Hampshire’s mountains overlooking Lake Winnipesaukee.

Lucknow, completed in 1913-14 was the home of Thomas Plant (1859-1941), a businessman with very strong connections to Boston.  There is no doubt in my mind that Plant was exposed to the architecture of Richardson, not only those buildings in Boston, but in the suburbs as well. Thomas Plant made his fortune in the shoe manufacturing industry in Massachusetts and retired a millionaire at age fifty-one. Mr. Plant was allegedly the architect of Lucknow (one of the tour guides mentioned that his brother was the architect and that Thomas Plant himself had control over the drawings, but Thomas took the title of architect. Oh the gossip!) and the Richardsonian influences could not have any less visible. From the bold massing and the harmonious integration of  the building with its surrounding landscape to the “eyelid or eyebrow” windows made famous by Richardson and later architects, Mr. Thomas Plant was without a doubt influenced by Richardson as well as the ideas behind the American Arts and Crafts Movement.

The Arts and Crafts Movement (1830-1870) springs out of the Gothic Revival in England by emphasizing a strict design morality(1) and rebelling against the often uninspiring machine made objects by placing emphasis on hand crafted ornamentation and details. Spearheaded by artists and theorists like William Morris and John Ruskin, who collectively with their art and writings became the driving force that integrated social and moral ideologies into the art and architecture that was produced in America beginning in Richardson’s  time. To decorate his mansion, Mr. Thomas Plant commissioned the best artists and craftsmen working in the Arts and Crafts Movement in America. The glasswork found in the mansion was commissioned to Louis Comfort Tiffany, lighting by the Edward F. Caldwell Company of New York and custom woodwork and furnishings by A.H Davenport/Irving and Casson of Boston, Richardson’s furniture maker. 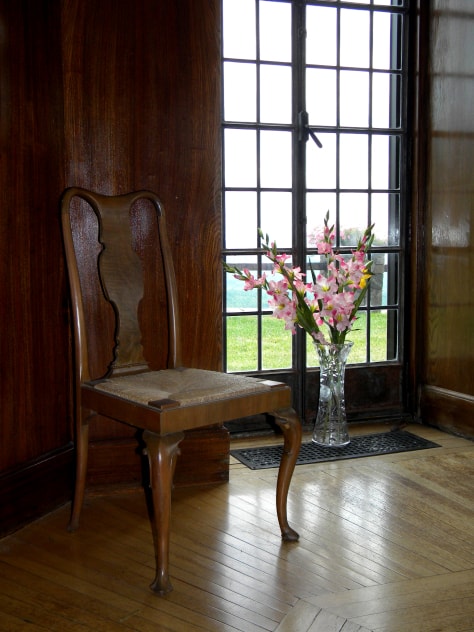 The prestigious furniture makers and carvers at A.H. Davenport and Company(2) who later in 1916 merged with Irving and Casson executed most of Richardson’s furniture commissions including the Court of Appeals in Albany, New York, the Crane Library in Quincy, Massachusetts, the Billings Library in Burlington, Vermont and the Converse Library in Malden (3).  A.H Davenport became one of the largest and most prosperous furniture makers of the time after purchasing The Boston Furniture Company in 1880. Albert Henry Davenport himself had been the bookkeeper at Boston Furniture Company until 1866 (4). Known for their exquisite craftsmanship and attention to the most inconspicuous details, Davenport and Company went on to make furniture for the mansions of the wealthy residents of the Back Bay, the White House under President Roosevelt and Saint Patrick’s Cathedral in New York City (5). The woodwork and furnishings at Lucknow are impressive and harmonize beautifully with the exposed joints  of the architecture.

Richardson died prematurely at the age of 48 (died in 1886) and did not live to see the tremendous influence his architecture had in America, Canada and Northern European countries.  The breathtaking mansion of Lucknow or “Castle in the Clouds” is a testament to the power of Richardson’s architecture and the exquisite craftmanship of A.H. Davenport/Irving and Casson masters of the Arts and Crafts Movement in America. 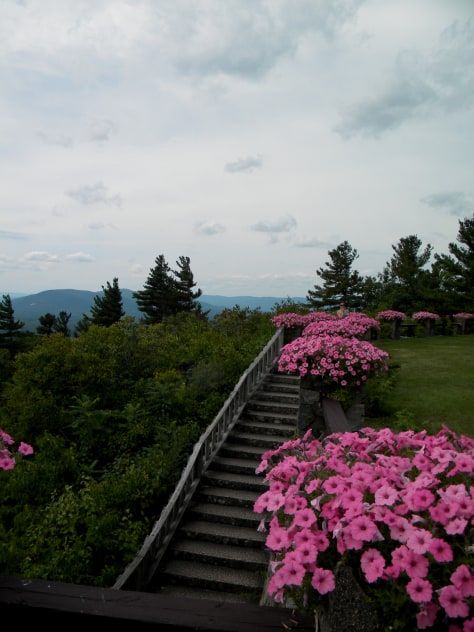 I’ve conducted an extensive research on Richardson’s furniture which culminated in a talk at one of his most ornate buildings. Perhaps, I can write a small post on the furniture of H.H. Richardson for all of you to enjoy. As long as you all want me of course! 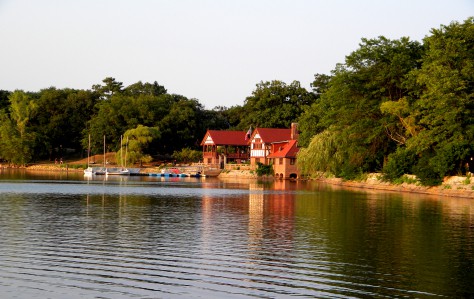 I can’t swim to save my life. As a matter of fact, I can’t even doggy paddle. I thought I’d tell you now before you read any further. I must also tell you that I’ve never experienced any life altering incidents involving water (in case you wanted to know). In fact, some of the fondest memories I have as a child have dealt with water has playing a prominent role. I’m just not a water type of person I guess. 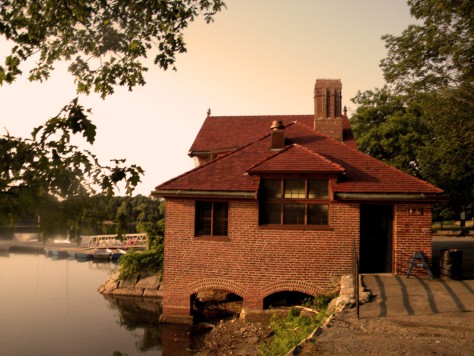 The sight of water alone re-energizes my senses and brings back memories of places and people I’ve encountered along my path in life. Up until recently, I lived about a 10 minute walk from the ocean. Whenever I needed to clear my mind or fill my lungs with the cool sea breeze, I would engage in a conversation with the waves crashing upon the shore. I no longer have that “luxury.” Ever since my move to another neighborhood in Boston, it requires more planning than I thought it originally would using public transportation.

Lucky for me, Boston is home to Frederick Law Olmsted’s Emerald Necklace – a series of picturesque parks linked as the name suggests, like a necklace by parkways and waterways.  In a spur of the moment decision, I ventured out to Jamaica Pond in Jamaica Plain earlier this week to connect with the pond and its beautiful surroundings.

Bounded by the town of Brookline and located within walking distance from the home and studio of both Frederick Law Olmsted and the architect Henry Hobson Richardson, Jamaica Pond is a popular destination for city dwellers looking to go sailing, fishing, jogging or walking. Both Olmsted and Richardson were friends and collaborated on many outstanding projects in Massachusetts which integrated the architecture with its surrounding landscapes.

The architecture at Jamaica Pond consists of a boat house and bandstand designed by the firm of Stickney and Austin and the now demolished Pinebank Mansion; the Queen Anne style house designed by John Hubbard Sturgis, of Sturgis and Brigham; designers of the Museum of Fine Arts that once stood on Copley Square. 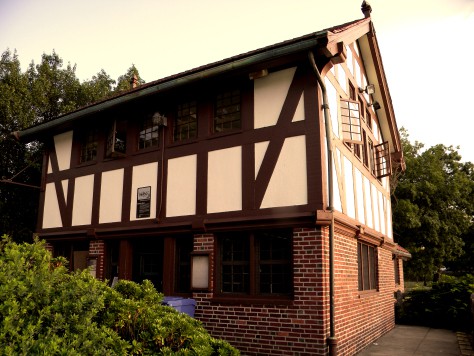 I hadn’t been to Jamaica Pond since I was about 11 years old. As I approached the pond from Pond Street, memories of family picnics and bike rides started to flow. I briskly walked along the pond’s edges, calmly awaiting the sunset.  As the sun began to set and colors emerged from behind the clouds, the architecture of Stickney and Austin became so much more intense contrasting with the soft glow of the sun. This moment reminded me of how much we all intrinsically benefit from the natural and designed landscapes that surround us.  And although I cannot swim, I try to engage and interact as often as I can with landscapes and architecture where water plays a prominent role like Jamaica Pond. 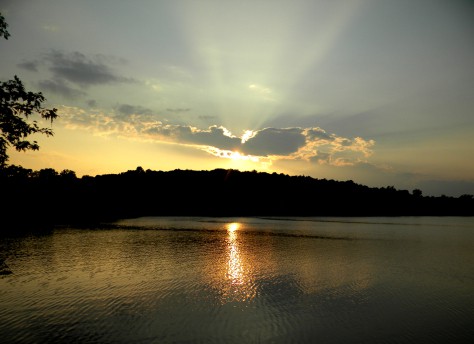 To learn more about the Emerald Necklace and the work being done to preserve and restore this magnificent cultural resource, click here.

To read about Stickney and Austin, see postshereandhere.