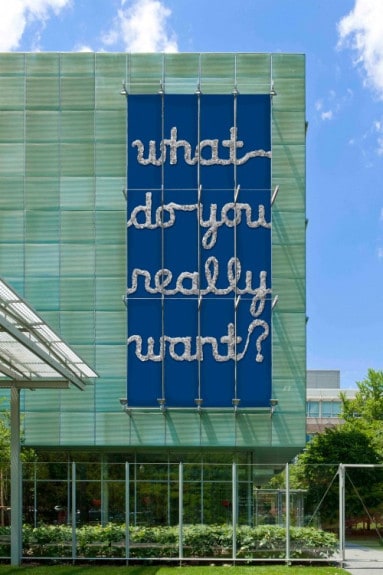 That was the subject line of a spam email I received earlier this week. The spam annoyed me more than it usually does because it appeared in my inbox, bypassing my junk email folder altogether. Currently on view at the Gardner Museum in Boston is an installation by Rachel Perry based on—wait for it—a spam email. Unveiled this week on the Anne H. Fitzpatrick facade of the Gardner’s Renzo Piano addition, the artwork is not only one of the more memorable works to have been installed on the museum’s facade, but also the most poignant to date.

Ms. Perry, a conceptual artist based in the North Shore, has been exploring among many other things, the meaning of language and how we communicate as individuals and with one another. In Ms. Perry’s oeuvre, one finds works that continue to draw upon this interest, works like the twenty-three drawings she made based on the manual transcription of her son’s 645-page medical records or her best known work to date: “Karaoke Wrong Number (2005-2009),” a video performance where the artist lip syncs wrong number messages left in her answering machine in the span of four years.

Ms. Perry’s installation at the Gardner consists of a single sentence sculpted out of aluminum foil, which she then photographed against a Bardini blue background (apparently a favorite color of Isabella Stewart Gardner). “What Do You Really Want?” is a simple yet profound question/statement that touches on many issues consuming our culture today. As humans, we’re never satisfied with what we have, do or say and whether you approach the installation in a serious or playful manner, Ms. Perry poses a question that allow us to look at ourselves and our place in the world.

Rachel Perry’s What Do You Really Want? is on view through June 2016.

This past summer the world-renowned Berklee College of Music announced that it was exploring the possibility of merging with the Boston Conservatory—the oldest performing music conservatory in the United States, founded in 1867. Boston Business Journal reports that the two institutions have agreed to merge, with a closing date of June 1, 2016.

On a related note, The Boston Globe reports that The School of the Museum of Fine Arts has signed a memorandum of understanding with Tufts University to transfer the school to Tufts. The agreement, effective on June 30, 2016 was based on several factors that will hopefully secure a better future for the cash strapped Museum School. The Museum School, which was founded in 1876 as the educational division of the Museum of Fine Arts, has been operating in partnership with Tufts University since 1944. Students at the Museum School will now have a much more rounded education in the liberal arts.

Both the merger of Berklee College with the Boston Conservatory and the transfer of the Museum School to Tufts University are great news in Boston, as these institutions will create more cross pollination within the arts in the city.

Following in the footsteps of its critically acclaimed 2011 exhibit Golden: Dutch and Flemish Masterworks from the Rose-Marie and Eijk van Otterloo Collection, the Peabody Essex Museum announced on December 1 its new exhibit, Asia in Amsterdam: The Culture of Luxury in the Golden Age, a collaboration with the Rijksmuseum. On view starting February 27, 2016, the exhibit will feature 200 works ranging from paintings, textiles, ceramics, silver, furniture, books and many other objects that illustrate the influence of Asia on Dutch culture in the 17th century. The Peabody Essex Museum will be the only North American venue for this exhibit, highlighting among its many objects from their world-renowned collection of Asian Export Art, masterpieces from the Rijksmuseum as well as from private collections throughout the Netherlands, Europe and the United States.

Asia in Amsterdam follows what seems to be a trend of exhibits seeking to investigate the influence of Asia on western cultures. For example, currently on view until February 15, 2016 at the Museum of Fine Arts, Boston is Made in the Americas: The New World Discovers Asia, an exhibit that traces that impact of Asia through objects produced in the colonial Americas. At the Asian Art Museum in San Francisco, Looking East: How Japan Inspired  Monet, Van Gogh, and Other Western Artists looks at the burst of creativity that emerged as a result of the international trade among Japan and other nations in the 1850s.

If past Dutch and Flemish art exhibits at the Peabody Essex Museum are any indication of how exquisite and beautifully installed this exhibit promises to be, Asia in Amsterdam: The Culture of Luxury in the Golden Age is most definitely not to be missed.