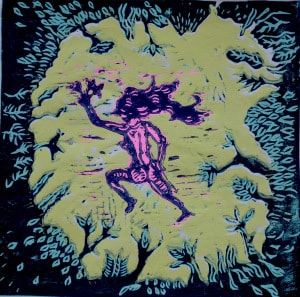 Vinicius Sanchez, a 2011 graduate of the School of the Museum of Fine Arts, is an artist who merges silkscreen and woodcut prints with film, video and animation. While a student in the Print + Paper area at the Museum School, Vinicius experimented with a variety of media, including animation, film and music production. His work has been exhibited in many venues and most recently showed his short film “After Kepler” in the SciEx: Extreme Science Film Festival at the MIT Museum in Cambridge.

Anulfo Baez: Vinicius, I’m glad I’ve had the opportunity to work with you at the Cambridge Center and I’m excited to show your work in PUSH/PULL: Recent Work from Printmaking Faculty which will be on view at the Cambridge Center this January. Of course, my first question has to do with being a printmaker. Have you always wanted to be a printmaker? If so, what attracted you to the medium?

Vinicius Sanchez: No. I was first drawn to woodcut by a folk art tradition called the cordel. It is a Brazilian form of the chapbook, where the front covers of the booklets are woodcuts. The printed cover illustrates the fictional/surreal stories within, which are written in stanzas. What also attracted me to printmaking was that I could alter images through multiples. In printmaking, the process as well as the content, creates the outcome. After years of printing, I still discover new possibilities.

AB: Now that I think about it, your work has a strong visual relationship with Brazilian cordel woodcuts, in the sense that both are bold and incorporate highly stylized whimsical illustrations. I recently read an article about Brazil’s enduring love affair with the cordel and how in Brazilian culture, cordels have always been associated with Brazilian music, particularly the music from the northeastern part of the country. It’s clear that you have studied the cordel tradition and have adapted it to fit your own style as an artist. This is evident in the animations you make in which you incorporate intricate cutouts from your silkscreens and woodcuts. How did that come about?

VS: I appreciate the Cordel since it unites music, poetry, visual arts and performance into one dynamic expression. The written poetry inside originates from diverse traditions themselves. They unite oral traditions and ballads, with the novel, fables and tale. I strongly recommend the book Stories on a String by Candace Slater for a comprehensive study on Cordel literature and its artists. When I began animating, I had many extra prints and multiples from projects. Seeing a link between the moving image and the sequence of prints, I started cutting out figures in my prints and began animating them. Initially I treated each print as a frame. As I developed, my cutouts and puppets became more complex, and I began using them as moving backgrounds and foregrounds. 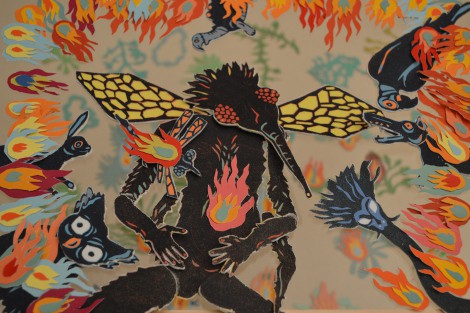 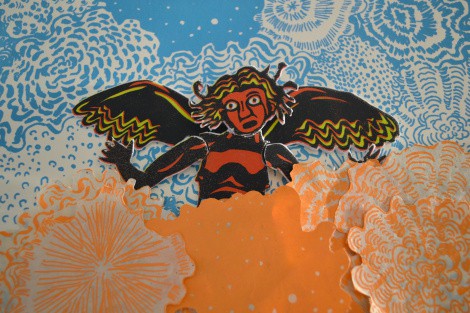 AB: One of my favorite of your animations is the one you made for the Brazilian musician Curumin and his song “Afoxoque.” This was a big deal since Curumin’s album was voted one of the top ten Brazilian Albums of 2012 by Rolling Stone Brazil. Your process photos on Printeresting for this animation are pretty awesome. How was the experience of working with Curumin and how did you two meet?

VS: We met online via Instagram. He initially liked the imagery I posted and followed the link to my YouTube channel where he became interested in my animations, and asked if I could create a music video for him. I knew and enjoyed his music before working with him, which contributed to a positive collaboration. I appreciate the exchange between music and the visual arts.

AB: I can see and hear how much of an influence music has been on your work, what do you listen to when you make work? Or better yet, what are you listening to these days?

I have an expansive music influence in my work. If you look at my Pinterest under Music Culture, it accurately portrays the sources I listen to.  Lately I’ve been appreciating longer music tracks. I like to observe how rhythm and melodies develop in when they are allotted more time. I’ve been listening to longer sequences of Mozart, Fela Kuti, Miles Davis and Erykah Badu. While disparate, they share in common tracks that range from 10 to 30 minutes.

AB: Tell me about your creative process?

VS: My creative process begins with observation. I find it fundamental to be observant of where I live and to participate in its culture. I begin with drawing or printmaking images to elaborate my ideas into visual language. I also create soundtracks for my animations.

AB: Approximately how many hours would you say one of your animations takes you, considering that you silkscreen all the imagery, cut out the puppets and even create the soundtrack yourself.

VS: I allow myself time daily to create cutouts, work in a print or create soundtracks. I don’t count the hours of pre-production, but my animations can take from 2 weeks up to 2 months. It depends on how my soundtrack works with the imagery and on how much work the piece needs post production.

AB: Out of all the techniques and processes you’ve worked in, which do you enjoy the most and why?

VS: I don’t have a preference. I prefer instead the exchange across disciplines. There are many forms of expressions, and each has a distinct perspective that contributes to wider vision.

AB: Who are some of your favorite artists and influences?

VS: I admire a wide range of artists and their practices, I have a long list of artists. In printmaking, I’ve been inspired by Francisco Goya, James Ensor, and Jorge Guadalupe Posada. What they share in common is their use of satire and the surreal. I also appreciate the work of El Anatsui, Louise Bourgeois, Eva Hesse, and Sonia Delaunay for expanding the use of non-conventional materials in art. Outside of print, I’ve been influenced by many references from folk art traditions, early animations, film and art history.

AB: Tell me about the subject matter in your work. It seems to me that you are influenced by a lot of different things, of course, we’ve already talked about music, but also mythology, nature and urban decay are present in your prints and animations. What other sources influence your work?

VS: The sources of my work have been derived from places I’ve lived in. I studied in Italy for almost a year, and from observing the architecture and symbols that were part of the day to day, I became enthralled with mythology and history. In every city, I absorb its stories and history. I find Boston an enriching place to live with its cultural diversity. The city affects how I express my cumulative stories and is a source of inspiration.

AB: Boston is a pretty great city. I love that we’re surrounded by so many colleges and universities and there are many great art lectures happening at all times. Also the city itself has some great architecture. I see that your year of studying in Italy also influenced your work, in particular some of your animations in which you use photographs of ancient Roman architecture as a backdrop. I’m just curious, what other cities have you lived in?

VS: I was born in Rio de Janeiro, Brazil and lived there through my childhood. I moved with my family to West Palm Beach, FL, and have been in Boston since college.  I have also learned from many other cultures while living here, which attests to our diversity.

AB: You’ve taught at the Cambridge Center for about a year now. Does teaching inform your work as an artist? If so, how?

VS: While at CCAE I’ve taught people who have work in different fields and careers. They bring to class a diversity of perspectives. As I teach techniques, I’ve seen my practice through different eyes. I have seen a diversity of beautiful woodcuts from my class. I’ve learned that no matter what process I teach students discover for themselves innovative solutions. Teaching has widened my perspective of printmaking.

AB: What are you currently working on now?

VS: I am currently working on a series of abstract animations. I am having the image follow the music, rather than editing a soundtrack to the animation. In this work, what orchestrates visual movement is the sound. I am also working on a series of woodcuts that further explore mythological narratives. While for now these projects are separate, they may influence each other in the near future. In creating a print, I often think of it as a film still.

AB: Any artist in PUSH/PULL: Recent Work from Printmaking Faculty exhibition you are looking forward to seeing in person?

VS: I look forward to seeing all of the artists in person. I find that this gathering of artists shows the many possibilities of print-media. I am happy to be part of an exhibition of works that are pushing the boundaries of print and interacting with other fields.

You can see more of the work of Vinicius Sanchez by following him on Instagram or checking his animations on YouTube and Vimeo.