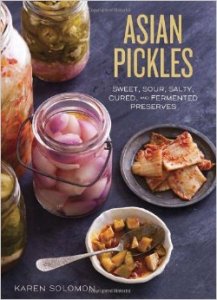 Asian Pickles: Sweet, Sour, Salty, Cured and Fermented Preserves by Karen Solomon is one of the most exquisite condiment and preserving books on the market today. A product (and reflection) of Solomon’s many travels throughout Asia, this book is organized into five geographic areas: Japan, Korea, China, India and Southeast Asia. It features among many other recipes, a fresh take on classic condiments and pickles such as Senmaizuke (“Thousand Slices” turnips) from Japan, several Kimchi and Banchan recipes from Korea, Chile sauces from China, Indian chutneys and the famed Fermented ‘Cock Sauce,” popular in Southeast Asian cuisine.

While you may find this book in the canning section of your local bookstore, Solomon notes in her introduction that most of the recipes featured in the book are not designed for long-term shelf storage. At first, to the ardent home canner like me, this may come across as a disappointing admission from the author. Solomon notes that the pickles and condiments included in this book are meant to be consumed within a few days and warns her readers that their refrigerators may soon become overcrowded with jars filled with delicious pickles and condiments. That’s a good problem to have when you’re into pickling and preserving. The fact that the recipes in Asian Pickles cannot be stored for long-term just gives me one more reason to continue experimenting using the condiments and pickles in my daily cooking.

With a beautifully designed layout and stylish photographs, Asian Pickles is more than a canning and preserving book. It can be looked at as an introductory guidebook into the condiments and pickles of the geographic regions Solomon discusses in it.  If you’ve ever been intimidated by making your own pickled ginger or congee, Solomon  takes the intimidation factor out of pickling ingredients and produce you may be unfamiliar with, as I was before reading this book.

I received a copy of this book from Blogging For Books in exchange for an honest review. All thoughts and opinions are entirely my own 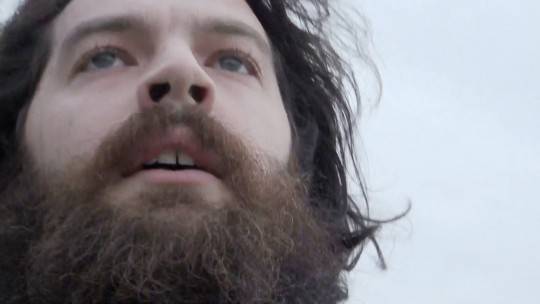 My introduction to the work of Rafael Rondeau and Maria Rondeau occurred last summer in Close Distance—a terrific group exhibition highlighting six emerging Boston-area Latino artists. That summer at the Mills Gallery, we saw videos that explored architecture and its ability to frame our experience of place. Once again, this brother and sister duo have collaborated on two separate, experimental video installations that explore the synthesis between the intimate and the public, by engaging structure, image and sound.

Maria, a practicing architect and artist and Rafael, a violinist and composer—have furthered their work with Eso Eres and Marea, two non-narrative, fully immersive works that re-examine and question the spaces we inhabit.

Eso Eres, is projected on a suspended light screen with a reflective mylar background set five feet away from the wall. The video captures a man running along a linear path, but instead of seeing the man’s entire body, we only see his face–an attempt on behalf of the artists to locate a visage as a “place.”

Marea, the longest and most immersive of the two videos captures a social encounter—a man sitting at a table in what appears to be an outdoor restaurant overlooking one of New York City’s neighborhoods. Projected on two elongated screens that trace the perimeter of a table—the video holds both foreground and background in focus, creating a sweeping and fluid movement that wraps around the viewer—who is encouraged to weave in and out of both installations. The sound, conceived by Rafael not only considers the spaces projected in these two installations, but also the gallery space where these works are shown.

From the sound of a string quartet—composed and performed by Rafael—to the hustle and bustle of a rural market in Guatemala—to the murmured prayers of women at a pre-Colonial church, Marea takes you on journeys near and far in the span of 10 minutes. The images and sounds in these two videos often collide with one another to awaken and alter our senses, prompting us to reconsider the spaces we experience on a daily basis.

Eso Eres/Marea is on view until March 02, 2012 at La Galeria at the Villa Victoria Center for the Arts in the South End.

June 19, 2016 “Where to Get More Local Arts Coverage Now That The Globe Has Cut Back,” Universal Hub.

January 26, 2012, “Artblog.net is back, plus more local blogs,” The New England Journal of Aesthetic Research.