As the saying goes, another one bites the dust. As if this week couldn’t get any worse, on Tuesday June 14, we learned that pages from the arts section of the Boston Globe were being cut and that freelance critics will no longer write art, music, theater and dance reviews for the paper. Long-time Globe art critic Cate McQuaid posted this news to her Facebook page and mentioned that she “will be writing a short review of one gallery show each week.” The review will be published in Friday’s paper, instead of Wednesday as usual. McQuaid also wrote that she will still be writing feature stories about art. 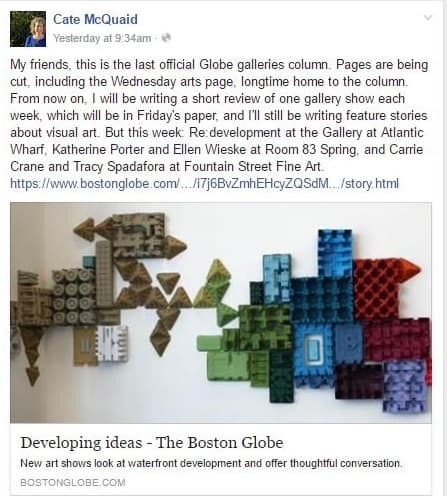 This is really disappointing news coming from the Boston Globe given the enthusiasm around the Boston Creates plan which outlines the city’s newly found commitment to the arts. With the dwindling of arts coverage in Boston, so does the quality of the work being produced here. And as Cate McQuaid mentioned, this means that smaller venues will get less coverage because of this decision, limiting the coverage to the big museums and productions.

Thankfully, we still have WBUR’s The ARTery as well as a handful of local art blogs, including The Arts Fuse, The Evolving Critic and Big Red & Shiny to pick up the pieces left by the Boston Globe, but this is really unfortunate.