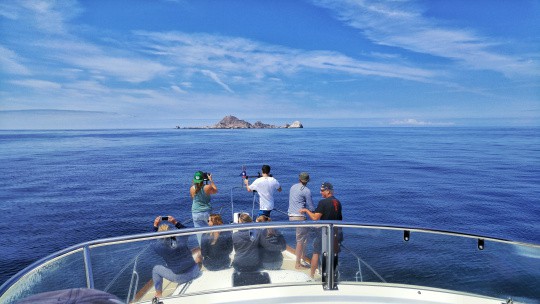 Film Still from “From the Golden Gate Bridge to the Farallones” Courtesy of Jack Bushell and Bushell Film.

Rarely do we ever get to read about the work of students graduating from one of the film and video programs in the Boston area. On Wednesday April 6, the Department of Visual and Media Arts at Emerson College presented its fifth annual festival of documentary films, featuring work completed by both undergraduate and graduate students at the college. Diverse in scope, the films presented on this evening truly emphasize the great filmmaking talent that is coming out of Emerson College, yet most of us in the blogosphere have barely paid any attention to them.

The evening started off with a journey to China by ways of Cheng Jing and Xianglong Li’s observational-style documentary “A Different New Year,” which follows two girls in China’s Sun Village—a voluntary adoption center for children whose parents are in prison. While the film won the Boston Creative Pro User Group Award for Best Editing, much of the story was difficult to follow and not because of the editing, but because of the subtitles.

Dan Albright and Andy Keyes presented their film “A Living Wage”—an expository-style documentary that chronicles the struggles of two service workers at the forefront of the $15 minimum wage movement in Boston. A Living Wage is one of the dozens of films out there documenting the lives of people trying to survive on a paycheck-to-paycheck basis, I just wished the filmmakers had dug deeper into the lives of the two main characters to tell a much more compelling story.

With an almost experimental feel to it, undergraduate student Mustapha Kelloud directs an impressionistic and moody portrait of a blind man in “Out of Focus.” Shot using a soft-focus approach, the technique underscores the subject’s blindness and really gets to the heart of the matter, but the first couple of minutes of the film are unnecessarily too uncomfortable to watch—that’s if the sight of needles and blood make you feel slightly squirmish.

John General’s “A Dialogue with Islam,” sets out to investigate the question of whether or not Islam is a violent religion. Through the use of some personal archival video footage and interviews with leaders in the Greater-Boston Muslim community, General has set the stage for a more thorough investigation of this question for his next film.

One of the most breathtaking and refreshingly shot documentaries of the night tells the story of marathon swimmer, Simon Dominguez as he attempts to become the first person to complete a 30-mile swim from Golden Gate Bridge to the Farallon Islands. Directed by undergraduate Jack Bushell, with cinematography by Bushell and Alec Rodrigues, “From the Golden Gate to the Farallones,” is both heartwrenching and inspiring.

Closing the night with another inspiring portrait is Hannah Engelson and her film “Jonah Stands Up,” about Jonah Bascle, a New Orleans artist, comedian and political activist born with muscular dystrophy.  Poignant, funny and memorable, the film reminds us all that life is always worth living to its fullest, just as Jonah did.