I often go to museums and share my experience on Twitter, Instagram and Facebook. What I’ve learned in the almost six years I’ve been on Twitter, is that there are museums that make it very easy for visitors to share their experience and then there are others that don’t. Those that do, even go as far as encouraging the use of specific hashtags as well as taking photos in the galleries. For someone like me and the thousands of fellow museum-goers part of the worldwide #ITweetMuseums community, these museums represent a sliver of what heaven must feel like.

In the months of January and February, I visited the Isabella Stewart Gardner Museum three times. On a couple of my visits, I tweeted a bit and on one occasion, I didn’t even look at my phone. On my first visit, I was pleasantly surprised to learn that visitors were not only allowed to take photos in their marvelous Carlo Crivelli exhibition in the Renzo Piano addition, but also in the first floor of Fenway Court—the original Gardner building. This caught me by surprise knowing that I was at the Gardner Museum, an institution with a very strict no-photos policy. “Awesome!” I actually said out loud, thinking that this was a great first step for the museum to let loose a bit and start embracing change.

After learning of the change in their photo policy, I visited two more times. While looking around in the Titian Room, I began to quietly observe visitors and their interactions with the museum guards. What I witnessed and heard, was something very uncomfortable, I even tweeted about it.

So I thought, if I’m allowed to take photos of the first floor, which includes the luscious courtyard, the Chinese Loggia and the Spanish Cloister and its exquisite painting by John Singer Sargent, then it must be okay for me to take a photo of only the courtyard, looking down at it from the upper floor windows. Makes sense to you, right? Well, it made sense to me and to the handful of visitors who were caught by the museum guards taking photos of the courtyard. I do confess that I did take a couple of photos of the courtyard from the upper floors on a separate visit, but did not get caught. While I felt a bit embarrassed for those visitors who got caught when I was there, I attribute my luck and discreetness to my experience visiting dozens of museums and historic houses throughout the country. At some point in my museum-going experience, I got fed up with being yelled at for taking photos (to be clear, not at the Gardner), so I sneaked in some photos whenever I had a chance. Nowadays when I go to the admissions desk at any museum, I ask about the museum’s photo policy and gladly comply with whatever the policy is. This impacts whether or not I share my experience with followers, regardless of how pleasant my visit is. By asking at the Gardner on my first visit in over a year, I learned I could take photos in the Crivelli exhibit. That change in policy allowed me to share some really stunning works with my followers on Twitter and Instagram.

Before I continue, I want to clarify that this post is not about making the Gardner Museum look “bad,” but rather to keep bringing attention to an issue that many museums continue to grapple with in 2016: allowing photography in their galleries. It so happens that the Gardner Museum is currently in the midst of some changes in their photo and communication policies. I want my opinions to persuade and better inform the staff and decision making process at museums and historic houses I visit. I want to underscore that I’m not asking that the Gardner Museum change their photo policies immediately, but rather to clarify it for visitors, myself included. At the end of this post, I have a separate comment on the bending of this new policy at the Gardner Museum.

Embracing change takes time whether it’s at museums as old and grand as the Gardner and the Museum of Fine Arts or as “new” and not-so-big like the Institute of Contemporary Art/Boston. That said, many of the museums I’ve called out and even praised for their outstanding/not-so-outstanding work have begun to embrace social media and even change their photo policies. Of course, I don’t take credit for all or any of these changes, but when a museum hears how their visitors feel when confronted with one of their policies, especially if it’s a silly no-photos policy, museum staff begin to engage in conversations with top decision makers at their museums, eventually causing change to happen. At least, this is what I hope goes on behind the walls of every museum.

After years of not allowing photography in their galleries, the Institute of Contemporary Art/Boston now allows and even encourages their visitors to explore the art on view throughout their very active social media accounts. On that same note, the Peabody Essex Museum, the Museum of Fine Arts, deCordova Sculpture Park and Museum as well the Harvard Art Museums have also embraced their social media by not only interacting with their followers, but also encouraging their visitors to take photos, share them on social media using specific hashtags and even hosting #instameet nights where their followers are invited to take photos of either a special exhibition or of the museum in general and share on Instagram. (Both the Peabody Essex and the Harvard Art Museums have organized these #instameets, I’m honestly not sure about the other museums, I list here) Anyone, regardless of who you are, is invited to attend, as it should be. (In the case of the Harvard Art Museums, all the university student were invited to attend)

The Gardner Museum recently announced on Instagram that they’ve partnered with @IGERSBOSTON—an Instagram account “made up of photographers and artists inspired by our beautiful city,” with almost 63,000 followers. The museum is organizing an #InstaMeet and they’re calling it “GardnerOffTheWall with the assistance of @IGERSBOSTON. In the museum’s own words, this would be an “exclusive event” that “will offer the museum’s guests the opportunity to experience the museum like never before. For two hours and while closed to the public, the Gardner will offer guests exclusive access to tour the museum and the ability to photograph its galleries and exhibits,” reads the caption under the photo below. 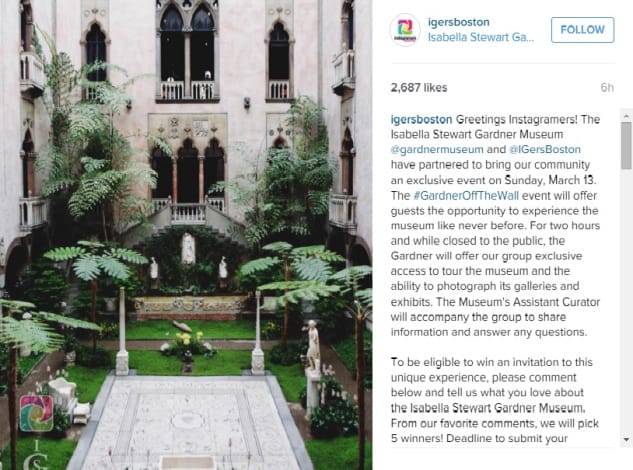 Sounds incredible, right? Indeed, everything sounds incredible until you realize that this is not what you think it is. Let me get this straight, in order for me to win an opportunity to experience the magic of the Gardner Museum and take photos to share with my followers (luring some of them to pay full admission if they ever visit in person), I have to go over to the @IGERSBOSTON account, comment on their post (which is a photo of the Gardner courtyard) and tell the staff what I love about the Isabella Stewart Gardner Museum? That’s right, but after doing all that work, you then realize that only the museum’s favorite comments—five in total—will be chosen as winners.

To bring this to a close, here’s what I think about all this: I think this would have been an exceptional opportunity for the Gardner to allow photography throughout the museum for one day— call it a special once-in-a-lifetime-capture-the-allure-of-the-Gardner-Museum event or something along that line)—regardless whether you’re on Twitter, Instagram, Facebook or whether you comment on a post or not. Too often we see institutions operating in the 21st century, but deeply stuck in the 20th century because they refuse to change and get with the times. Why must we keep insisting on limiting access to museums, or giving exclusive access to an elite or handpicked group of people when those who need or can benefit from a museum the most can’t even get through the front door because their admission is outrageously pricey? I think there are many ways of building community, but this is not one of them.

We can organize clever marketing events like #GardnerOfftheWall and still be inclusive and engage with everyone in the community at-large. What’s a museum without the community that sustains and lives around it?

Unless you hold a membership and are invited to preview an exhibit or take photos of rarely photographed places inside a museum, that’s understandable because those perks come with that membership, but hand-picking members of the public has no place in community engagement, that’s if “engaging” your community is the ultimate goal of a museum. I think it should be, but not every museum agrees with this.