The Fogarty Building, Courtesy of the City of Providence, archive photo gallery

The Providence Journal is reporting that the Fogarty Building in Providence will finally be torn down and replaced with a high rise hotel. As you may know by reading this blog or by following me on Twitter, I am a big fan of the concrete architecture of the sixties and seventies and an even bigger fan of the Fogarty Building. An outstanding example of Brutalist architecture in Downtown Providence, the John E. Fogarty Memorial Building was designed by the Providence firm of Castellucci, Galli & Planka. It opened in 1968. Unfortunately, the news that it will be torn down is not surprising as no one could find a creative solution that would save the building and some wanted to see its destruction from the beginning.

Occupying an entire city block, the three-story building—reminiscent in many ways to Boston’s great Boston City Hall—ushered in a new era full of optimism for Providence. Constructed using reinforced concrete, the building was originally commissioned to house the state’s welfare services. It then became the home of Department of Human Services until 1999.

While on the city’s watch, the building fell into disrepair and crumbled. It eventually was transformed into an ugly duckling; an eyesore too ugly and too hated to be saved from the wrecking ball.

Ignored by city officials and pedestrians (except those with a deep appreciation for its beauty), The Fogarty Building remained vacant for many years, often inviting unfavorable criticism from the public and even the city’s then architecture critic who favored the Georgian Revival style seen all over Providence over the architecture of the Recent Past that dominates much of the Downtown Arts District (you can read David Brussat’s words here, and here. The list goes on and on).

Over the years, many forms of redevelopment had been proposed, but nothing came to fruition—the building was too hip, too fresh and too young for a city that refused to embrace a forward-looking structure such as this one. 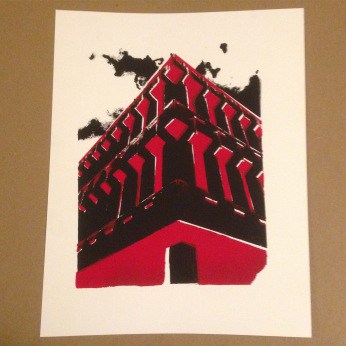 I’ll be heading down to Providence within the next week or so to say my final goodbye to this Heroic piece of 20th century architecture in Providence. If you would like to learn more about Providence’s Modern and Recent Past architecture, there is a self-guided walking tour of downtown buildings. I highly recommend you take a stroll this Spring and admire works by the likes of Paul Rudolph and I.M. Pei among others.