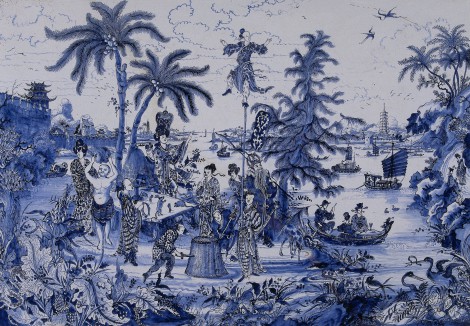 Following in the footsteps of its critically acclaimed 2011 exhibit Golden: Dutch and Flemish Masterworks from the Rose-Marie and Eijk van Otterloo Collection, the Peabody Essex Museum announced on December 1 its new exhibit, Asia in Amsterdam: The Culture of Luxury in the Golden Age, a collaboration with the Rijksmuseum. On view starting February 27, 2016, the exhibit will feature 200 works ranging from paintings, textiles, ceramics, silver, furniture, books and many other objects that illustrate the influence of Asia on Dutch culture in the 17th century. The Peabody Essex Museum will be the only North American venue for this exhibit, highlighting among its many objects from their world-renowned collection of Asian Export Art, masterpieces from the Rijksmuseum as well as from private collections throughout the Netherlands, Europe and the United States.

Asia in Amsterdam follows what seems to be a trend of exhibits seeking to investigate the influence of Asia on western cultures. For example, currently on view until February 15, 2016 at the Museum of Fine Arts, Boston is Made in the Americas: The New World Discovers Asia, an exhibit that traces that impact of Asia through objects produced in the colonial Americas. At the Asian Art Museum in San Francisco, Looking East: How Japan Inspired  Monet, Van Gogh, and Other Western Artists looks at the burst of creativity that emerged as a result of the international trade among Japan and other nations in the 1850s.

If past Dutch and Flemish art exhibits at the Peabody Essex Museum are any indication of how exquisite and beautifully installed this exhibit promises to be, Asia in Amsterdam: The Culture of Luxury in the Golden Age is most definitely not to be missed.