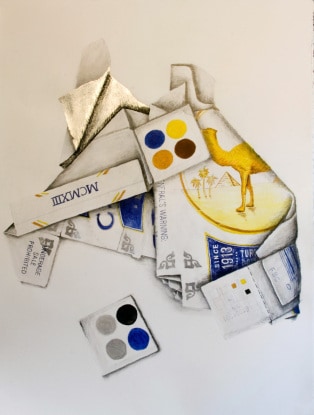 Jason Asselin is a multidisciplinary artist working within the realm of printmaking, drawing, installation as well as public art. He holds a BFA in printmaking from Montserrat College of Art in Beverly, MA and a MFA in Print Media from the Cranbrook Academy of Art in Bloomfield Hills, MI. His works has been exhibited at many institutions and organizations, including Chandler Gallery in Cambridge, Seven Gates Gallery in Southbridge, MA, Traina Center for the Arts at Clark University in Worcester, artSpace in New Haven, CT and most recently at the Wifinsky Gallery at Salem State University in Salem. His MFA thesis “Continue the Tradition of Restriction” was exhibited at the Cranbrook Art Museum. If you live in Boston, you’ve most likely have seen Jason’s “You Are Here” in the mezzanine of the World Trade Center Silver Line stop of the MBTA. Jason has been teaching drawing at Salem State University for the past six years and has taught silkscreen for beginners class at the Cambridge Center for Adult Education since 2014. You can see more of his work on his blog or in the upcoming exhibit I am organizing for the Cambridge Center on recent work by the Center’s printmaking faculty.

Anulfo Baez: You have both a BFA and MFA in printmaking.  Of course, my first question has to do with being a printmaker. Have you always wanted to be a printmaker? If so, what attracted you to the medium?

Jason Asselin: Originally I had the intention of concentrating in photography, I did that for my first two years at Montserrat College of Art. I realized that I liked using different methods to create my art, so I gravitated over to printmaking. The printmaking department at Montserrat has a workspace that can accommodate experimentation, I discovered that the print environment is where I like to be when I’m discovering a new body of work, within an experimental mindset.

AB: Looking at your body of work, you’ve experimented a lot with different mediums within printmaking. You’ve done silkscreen, letterpress, woodcut and other techniques. Do you find yourself preferring one technique over another?

JA: Screenprint and etching are generally my favorite. Very different technology, image quality, and outcomes. It’s the content and ideas that drive the decision to use a particular medium.

AB: How has your work evolved as a printmaker?

JA: Early on my prints were more completed. I felt like I needed to control all aspects to get good results. I’m much more comfortable with “mistakes.” I use the mistake as just another part of the discovery process. The greatest part of this type of thinking is you’re liberated from your critical internal voice, you can make a mess and not have to be ashamed of your mark-making. You embrace the mistake.

AB: What artists or teachers have been influential in your work as a printmaker?

JA: Professor Ethan Berry from Montserrat, Professor Haig Demarjian from Salem State, Robert Rauschenberg, Christo, and one my favorite inspirations Chris Burden. Mr. Burden was not a printmaker, however, if I ever need some instant inspiration he is my go-to source.

AB: Chris Burden was an interesting conceptual and performance artist. I’ll never forget the first time I saw ‘Shoot” his landmark 1971 performance in which he recruits a friend to shoot him in the arm with a rifle. It was one of the most insane performances I’ve seen and learned about. It was shocking for me as well as for many people who have seen and continue to see it to this day. So was much said in that piece about the political and social movements of the late ‘60s and ‘70s including the atrocities of the Vietnam War. Have you seen Burden’s work Light of Reason at the Rose Art Museum at Brandeis University?

JA: I have not been to Light of Reason, but I’ve visited Urban Light at LACMA. It’s a fantastic public art installation—day or night. I like seeing how children respond to it at first, There’s a feeling that it’s a sacred space. Children walk carefully at first through this space. It feels like a memorial to technology and the integrity of innovation. It’s hopeful, optimistic, and gives a sense of peace. Once children are used to it you see that they start to play within the rows of lights. It’s really special.

AB: This is a good transition into my next question. You’ve also made videos and films as well as public works of art. Learning about your work, I’ve noticed that there’s an interest on your part in performance art and I can see why you consider Chris Burden an influence. Did this interest in incorporating performance into your work start with your MFA Thesis show at Cranbrook Academy of Art in which you screen-printed 500 handkerchiefs and distributed to museum visitors during April of 2005?

JA: Throughout my graduate school work at Cranbrook, I attempted to use some elements of performance. Many of my artworks at that time were interactive where the viewer would have to participate in the artwork. Sometimes the required interaction was simple like flicking a switch on to turn on the artwork, other times it required the viewer to completely compromise their safety. The thesis show was a continuation of these experiments. The good news about the handkerchiefs was that all 500 disappeared over about 2 weeks.

AB: What are you currently working on?

JA: I apply to public artwork projects around the country almost daily. Because there is so much competition for these projects you need to apply to everything, and just maybe I will be chosen for one. I’m also continuing to work on a series of drawing/watercolor/prints called “Pack of Lies” and it focuses around the world of cigarettes. The packaging, health effects, subculture, chemicals and a history of industry deceit.

AB: The works in your “Pack of Lies” serieswere the subject of a recent exhibition at Salem State University. How did this body of work come about?

JA: I started drawing different trash found on the streets. I liked the smashed beer cans and smashed cigarettes packs. To consolidate the content I decided to focus on only one vice, cigarettes. I like that nearly everyone has a story or opinion about this addiction. It’s relatable to many people. 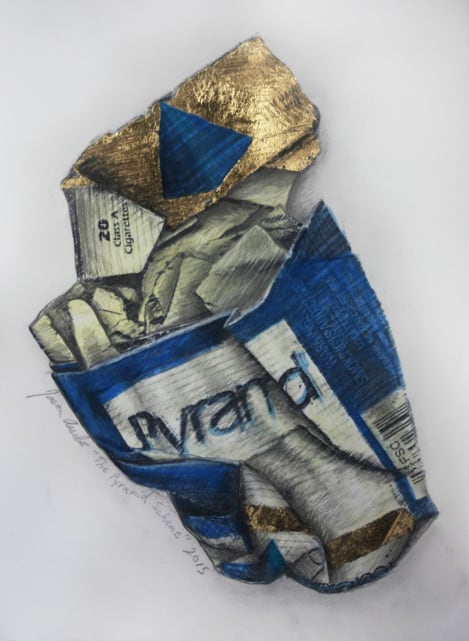 AB: How has your practice change over time?

JA: I originally believed that I would only make art for myself. Otherwise to make a living I would be a photographer or a graphic designer. In grad school I realized that I had the energy and the will to make public art. I focused my practice on that goal, to be a public art artist first.  Another factor in forming my art practice has been through teaching art. I’ve been teaching drawing at Salem State University for 6 years and teaching this information has heavily influenced my artwork.

JA: It’s painful to start with nothing, but I have accepted those feelings. I’ll start with some sketches and doing a bunch of reading and researching. I need to see other information and other ideas around the general subject. I need to see what came before me so I feel like there is a connection to what I’m about to create. I attempt to consolidate the sketches and ideas. Somehow the ideas find their way and come together on the page, it feels like magic when an artwork develops naturally.

AB: Where do you find the ideas for your work?

JA: I do a lot of research for my classes at Salem State. This research also finds its way into my artwork. There are some requirements that I impose onto my artwork: my art must have an element of interaction with the public or public space—this requirement alone helps to quickly frame up the ideas of an artwork—I also feel that my artwork should have a message about political, physiological, or social concerns.

AB: In researching this interview, I came across an article in the Boston Globe that talked about your public art work at the World Trade Center Silver Line stop here in Boston. You made a 68 foot lenticular mural of swimming goldfishes that become active by people’s movements throughout the mezzanine of the station. As I mentioned before, there is an element of performance and interactivity in your work which is one of the requirements in your work. Can you tell me how was the experience of creating a large scale public work of art like the one you created here in Boston for the World Trade Center stop?

JA: It was a difficult process because there were many parts of the project that were completely new to me.  It was also very exciting to think in such a larger scale with completely different concerns. Safety is generally not an issue when you’re making a screenprint for a gallery. This mural needed to not fall off the wall in the case of an earthquake. The mural needed to last at least 50 years without any maintenance costs. And what if pigeons could land on the mural, well now there would be bird poop all over the art. We had to make an aluminum roof and housing that kept the birds off the artwork to keep it clean. It needed to be UV stable and shatterproof. I needed to hire local union members to install the artwork. Wall fasteners needed to be approved for the weight of the aluminum frame. The wall needed to be checked with special equipment for hidden electrical lines embedded into the concrete so that the union guys didn’t get electrocuted when drilling the holes for the fasteners. The check list went on and on. It’s a lot to juggle but it’s totally worth it in the end when the artwork is up there for everyone to see. It’s really the best feeling. 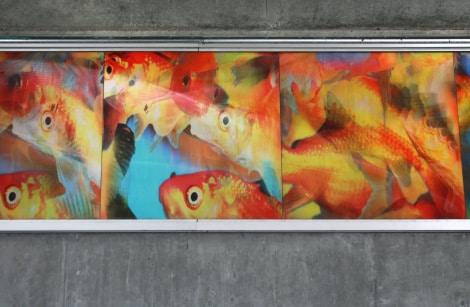 AB: What was the last printmaking or non-printmaking show you saw and what surprised you the most about it?

JA: Recently, I visited the State House in Boston. In the center of the building, under the gold dome you will find a public exhibition in the Hall of Flags. Here they have some back-lit photo reproductions of different versions of the American flag. The history of our flag is really interesting and just being in this room in the State House will amaze you. The architectural details are something we never see day to day. It’s a very romantic and inspirational space. Also on the second floor you can visit the House of Representatives House Chamber. I also found this space to be very inspirational.

AB: Your answer to this question involves a work of architecture rather than an exhibition. I asked the same question to Selma Bromberg—one of the other printmaking faculty members at the Cambridge Center and her answer also involved a work of architecture she had seen in Taiwan. Sometimes we are so involved in the hustle-and-bustle of daily life that we forget to look at the buildings and spaces around us. I think this is something you continually try to explore in your work—activating spaces with people in mind.

JA: I definitely think about that a lot. I’ve have many plans in mind about activating spaces for future projects. Recently, I was invited by the Urban Culture Institute to submit a Request for Qualifications for a project at Boston Children’s Hospital—this would be the next potential public artwork project if all goes well. Fingers crossed.