In my time working as Program Director managing and programming visual arts courses at the Cambridge Center for Adult Education, I’ve had the opportunity to get to know many artists and craftspeople. One of the programs I oversee is printmaking, which under the direction of Selma Bromberg, teaches students several printmaking techniques including relief, intaglio and silkscreen printing. I recently sat down with Susan Paladino—one of the printmaking instructors at the Cambridge Center to talk about printmaking, our shared interest in Japanese culture and her upcoming encaustic collagraph class in September 2015.  Susan began teaching experimental monoprints and monotypes at the Cambridge Center in 2012 and has exhibited her work nationally, including at the Fitchburg Art Museum, Provincetown Art Association, the Drawing Room in Portland, Maine, Cambridge Art Association and many other venues.

Anulfo Baez: Susan, I’m really glad I’ve had the opportunity to work with you over this past year at the Cambridge Center, especially in planning the summer term since this is when we talked about your work as printmaker.What is it about printmaking that attracts you to it?

Susan Paladino: I became curious about printmaking when I first saw that so many painters I admired also did prints that I liked.  When I began printmaking, I tried all kinds of techniques, etching, lithograph, and woodcut.  I quickly learned that making monoprints was what I enjoyed most and to this day I continue to refine my skills and conceptual process. I enjoy the element of surprise and flexibility that I find in monoprinting. I can be more spontaneous and more expressive and yet make variable prints for editions. It’s not important for me to make 30 identical prints.

Monotypes are for making one print whereas with monoprints you’re working with a matrix, though you can change and transform both with all kinds of printmaking paper, inking and mixed media. There’s so much room for experimenting.  Recently I’ve been using more Asian papers.

AB: You studied at the Museum School as well at the Artists Student League of New York and you’ve taught printmaking at several places, including here at the Cambridge Center.

SP: At the Museum School, where I studied printmaking, there was a terrific group of us that would, for years, get together at least once a week in an Open Studio.  We’d share what we were doing and very open about how we achieved certain results.  It was so much fun to be in a studio with other dedicated printmakers.   I hope the Open Studio at Cambridge Center inspires this kind of camaraderie and inspiration.

AB: From my understanding of printmaking and having friends who are printmakers, it seems that there’s a social aspect to making prints that makes the medium even more attractive to work in. Is this true for you as well?

SP: I do enjoy being around other creative people in a print shop.  I have my own studio but there are times when it can be fun and inspiring to catch up on what other people are doing.  It is good learn some new techniques and find out who is showing where but you can make some very good friends because of the mutual interest in art.

SP: I didn’t know that you were so interested in Japanese culture.  I, too, took a Japanese calligraphy course at CCAE and was very pleased to dip my foot (that is, my brush) into those waters.  I like combining Eastern aesthetics with Western ones, exploring the outcomes and working through them.

AB:When I was in college I took a course in the history of Japanese art and architecture which really cemented my love for the culture. Looking at your past work, I can see an affinity toward Eastern art, in particular the Japanese imagery I am familiar with.  At some point in your career you’ve also explored Netsuke—the miniature sculptures popular in 17th-century Japan. Have you always been interested in Japanese culture and history?

SP: When I was in my twenties, I’d go see as many black and white Japanese films such as Kurosawa and Ozu.  I loved the graphic contrast of the cinematography.  I’ve had a long-time affinity toward Eastern art, though I can’t necessarily explain all the reasons why. Over the last couple of years I created a body of work that used Netsukes as a starting point.  These characters came alive for me and I enlarged them and then put them into different environments, new ones. I found that they expressed what I was feeling at the time and their strong personalities spoke powerfully to me. Besides Japanese culture in and of itself, there is also an appreciation of  “cuteness” and pop among the artists, and I see it in the art all the time.  Takashi Murakami is just one of the more well-known ones here. 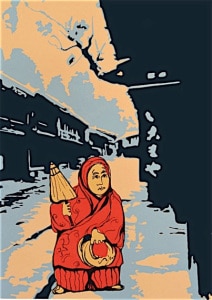 AB: Some of the work you’re making now is influenced by Boro textiles—a textile usually sewn by women from 19th and early 20th century rags and patches of indigo dyed cotton, popular in Edo Japan and even Showa-era Japan. What got you interested in these textiles?

SP: Many years ago I had a small pillow business and used antique textiles to make them.  I’ve quite a collection from the early 20th century.

Recently I became curious to learn about indigo dye and came across some collections of Boro textiles and I immediately fell in love.   It has not only renewed my interest in textiles, but also sparked new concepts for the art of printmaking and encaustic painting.

AB:Just a few seconds ago you mentioned indigo. I’ve always been fascinated by textiles and dyes, in particular the history of indigo. Have you experimented with using indigo in printmaking or is that something that is taboo?

SP: I have recently finished some work using indigo color with Akua inks.  You said you may post some of them here.  Some are on paper and some are on panels with encaustic medium.  I am happy with the results but plan on learning to use dye too which I think will work very well with certain papers.

AB:I’ve never taken a printmaking class, but have dabbed a little here and there and I’ve always been interested in the history of printmaking—particularly Japanese woodblock prints.

SP: It sounds like you should take my class. Even if you take one workshop, it will open your eyes to printmaking in general.   Since you write about various kinds of art, you’ll have a better understanding of what is involved in the creation of prints. I found, too, that even when I learn something that I know I’m not going to use, my eyes open to an appreciation of other work at a deeper level of understanding.  A couple of years ago, I started exploring the process of encaustic paint using a medium of wax and resin with pigment and then fuse it.  I have set up my studio for this process.

AB: I think I will take the encaustic collagraphs class you’ll be teaching this Fall. It’s a new class at the Cambridge Center and you’re using beeswax on plexi-plates to create monoprints, which to my understanding is a rather newer method of printmaking, correct?

SP: This is a printmaking technique that uses beeswax with only white pigment to create textures on a plexi-plate to make prints with paper. The wonderful thing about using beeswax, as opposed to acrylic gel medium, is that you can carve and scrape into it, which allows me the opportunity to vary textures to suit the piece.

In addition, I have so many ideas that I like to share with students for combining and using different materials and tools.

AB: That sounds really exciting Susan! Encaustic art-making has become very popular nowadays and I hope this class really takes off here at the Center.

SP: We are talking a lot about process here, but I do want to help give students the means and techniques so that they can become free to find their own ideas and concepts and work them through. All of us can take comfort in this quote from Picasso ”I am always doing things I can’t do, that’s how I get to do them.”

AB: How is your interest in beeswax and printmaking going?

SP: I became a new member of New England Wax (NEW) this past March. I’ll be attending their September meeting in Andover, and I’m excited to meet other artist members.  NEW is a community of artists that I want to work with and there will be opportunities to exhibit my new work in the medium of encaustic.

For more information on Susan Paladino, you can visit her website and see more of her work here