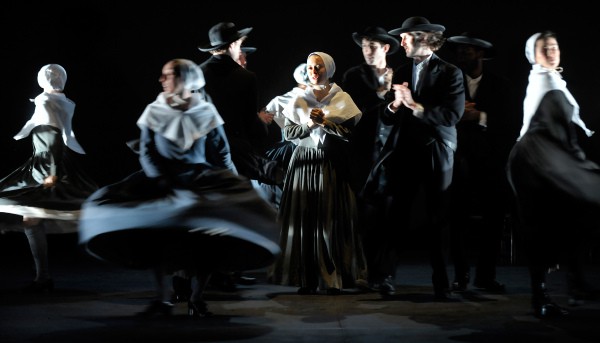 Finely crafted furniture and harmoniously proportioned buildings are some of the things that come to mind when one hears the name “Shakers.” The Shakers (their formal name was The United Society of Believers in Christ’s Second Appearing) considered work as a form of worship, a belief reflected in every aspect of their lives, from their simple unadorned furniture to the separate but equal living quarters. They believed in being perfect and in practicing celibacy. This fascinating group of people are the subject of Angel Reapers, a hybrid theatre, music and dance show presented by Arts Emerson at the Cutler Majestic Theatre.

Angel Reapers is choreographed and directed by MacArthur “Genius” Fellow Martha Clarke and written by Alfred Uhry, winner of the Academy Award (Driving Miss Daisy. Yes, this Driving Miss Daisy), two Tony Awards (Parade, which I saw a few years ago at the Boston Center for the Arts and The Last Night of Ballyhoo) and a Pulitzer Prize (not to brag, but last night’s opening was even more fantastic thanks to the presence of Clarke, Uhry and Arthur Solari, the musical director). Angel Reapers isn’t shy to explore and indulge in the many pleasures that the Shaker denied themselves. It is ravishing, seductive, and erotic made compelling by Clarke’s marvelous choreography and the many traditional Shaker songs sung a cappella. Angel Reapers will leave humming one or two of those songs as you exit the theatre. Of this, I’m certain.