The Museum of Fine Arts is celebrating the Greek goddess of love and beauty in “the first museum exhibition devoted to Aphrodite.” Aphrodite and the Gods of Love (October 26, 2011 through February 20, 2012) features approximately 160 classical works drawn primarily from the museum’s extensive (and one of the finest in the country, second only to the Metropolitan Museum of Art) collection of Greek and Roman art. The museum’s proactiveness in returning looted works to Italy has resulted in an outstanding collaboration with the Italian government noticeable in 13 important loans in the exhibition, nine of which are from Rome and Naples. The exhibition also features a Sleeping Hermaphrodite which is among these nine loans (more on this work later).

It is only natural for this exhibition to open with the birth of Aphrodite, her rising from the sea out of a shell. According to myth, the Titan Kronos castrated his father Ouranos and flung the genitals into the sea where a mixture of white foam was created, giving birth to Aphrodite.  The goddess’ ancestors, cults, beauty, marriage, and myth are also explored in depth with objects that range from perfume bottles to mirrors. Her place in the history of the female nude in Western art was the subject (for the most part) of a symposium held on November 5th, 2011 (I live tweeted the first half of the symposium, but finding those tweet may be somewhat difficult as I tweet quite often).

Not only is Aphrodite associated with beauty, love and marriage, but also with war and male potency. Aphrodite had many children, including Priapos (the well endowed god of fertility and protector of livestock) and Hermaphroditos, the two-sexed son, portrayed as a beautiful female figure with male genitals. This Sleeping Hermaphrodite is the biggest and most talked about surprise in the show. How could one not discuss its beauty?

I was somewhat surprised at people’s reactions upon seeing the other side of the Sleeping Hermaphrodite. This isn’t the first and only hermaphrodite in art history, but if you go and experience this show, you’ll understand the thrill (for lack of better word) this wonderful work ignites. Here are some examples of other hermaphrodites in art history. You decide for yourself how the hermaphrodite in the exhibition compares to these ones here, but there are many more than the three I have posted here:

Love how the light delicately shines on this hermaphrodite; the material also helps. 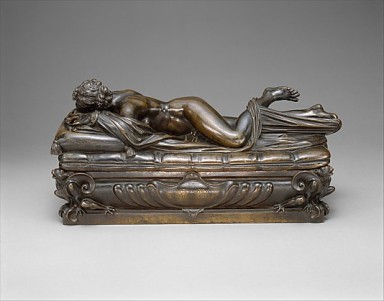 Possibly the most famous hermaphrodite (at the Louvre) in the history of art:

And of course, there are also standing hermaphrodites:

The most recent out of the hermaphrodites I present here, proving that Aphrodite is a force to be reckon with. 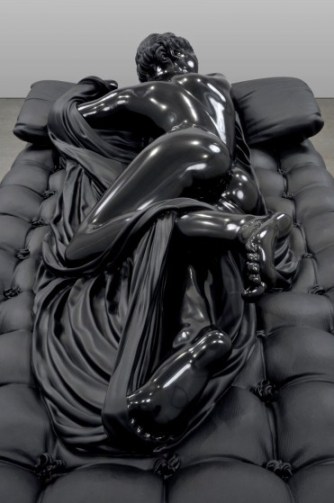