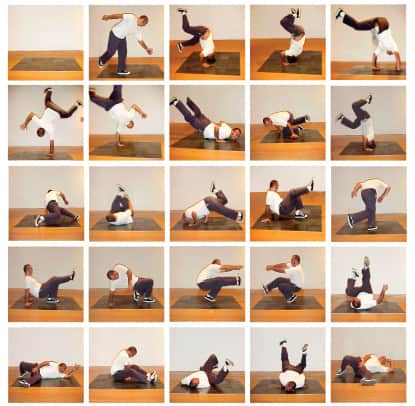 Until now, I have not been a fan of most of the exhibitions that have originated at the ICA. Helen Molesworth, the ICA’s chief curator has organized an exciting show that traces the journey of the line from changes in drawing in the 1960’s to its explosion off the page and into three dimensional space, which ultimately finds itself in the realm of dance. Dance/Draw (October 7 – January 16, 2012) is beautiful, dazzling, dynamic and engaging (Cornelia Parker’s Hanging Fire (Suspended Arson) does not convince me yet in this show, but I can be persuaded. Possibly.).

Dance/Draw looks back to the 1960’s where artists began to make drawings with “a wide range of materials and they frequently did so using more than simply their hands.”Approximately 100 works ranging from
video, photography, drawings, and sculpture are featured in Molesworth’s first major show at the ICA. A series of live performances will also take place in the galleries and in the theater including Trisha Brown’s 1970 seminal work Floor of the Forest, part sculpture, part dance prop and part performance. This performance is a breath of fresh air. 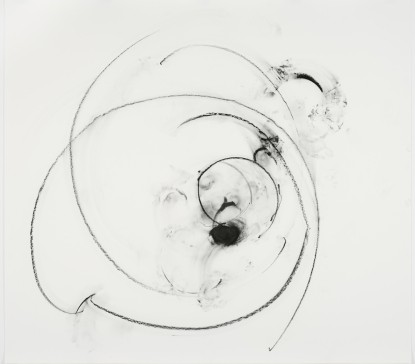 In the first gallery, Trisha Brown’s “Untitled, 2007” a charcoal and pastel drawing, is according to Molesworth “the drawing that started it all.” Re-defining the conventional meaning of drawing, the works in this gallery borrow from dance and performance to explore medium using more than just the hand. Feet, eyelashes, hair or the artist’s entire body is incorporated into the creation of a work on paper.

Janine Antoni’s Loving Care, 1992-1996 a performance at the Wadsworth Athenaeum shows the artist dragging her “Natural Black” dye saturated hair back and forth across the floor, in the process creating an “ink drawing.” Butterfly Kisses, another work by Antoni created by battling her mascara-coated eyelashes against a piece of paper. These two works are wonderful and made my heart skip a beat. They’re flirtatious and playful, but so is the rest of the exhibition.

In curating this show, Molesworth did not forget to make it as geographically and as culturally diverse as possible (yes, this matters to me as a person of color). Not only is Dan Ranalli, a Boston artist and Professor at Boston University included in this show, but so are the works of Cecilia Vicuña, Helena Almeida, and Robin Rhode and many other interesting and remarkable artists.

Another pleasant surprise was seeing the Mediatheque transformed by the Chilean artist Cecilia Vicuña’s with a site specific work titled Water Weaving, 2011. A space wasted no more. The exhibition catalog is disappointing as it does not do justice to the show, but c’est la vie

Dance/Draw is ambitious in scope and it delivers knockout punches that will have you craving for more. The show is the Paso Doble of exhibitions, it starts off strong and finishes off strong.