Grace and Glamour: 1930’s Fashion at the American Textile History Museum in Lowell, tells the story of the tumultuous Thirties through an exhibition of thirty-five dresses, accessories and sample fabric pattern books. The dresses are primarily drawn from the Peggy Cone Collection at the museum with a few loans from Lasell College.

Three dresses from the Twenties set the stage for the spectacle that was to become the Thirties. Their boxy outlines embody the masculine-like fashion tendencies of the times. These dresses obscured female curves and fashion details that defined the 1930’s.

The Thirties were economically scarred by the stock market crash of 1929, but as the exhibition hints at, the decade was also marked by architectural and technological innovations. The 1933 Chicago World’s Fair and the 1939 New York World’s Fair brought with them new ideas and cross-cultural exchanges that changed the era. The spirit and aspirations of the times are reflected in the art, architecture and industrial design produced. 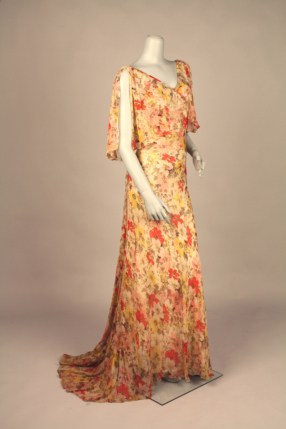 The unflattering boyish look of the Twenties was abandoned for a more form fitting and feminine silhouette.  The introduction of man-made fabrics like rayon, acetate and tricot allowed designers and manufacturers to produce inexpensive garments that felt and appeared luxurious.

While the objects in the exhibition provide enough context to understand the times, many references to architecture and film are made throughout, but seldom acted upon. Connecting architectural ideas with fashion and film produced in the Thirties would have allowed for a jazzier thrilling experience.

Grace and Glamour: 1930’s Fashion is best experienced clockwise as the dresses are organized chronologically, tracing the development of fashion in the Thirties and hinting at challenges that were to plague the following decade. The exhibition closes on October 16, 2011.