Henry Hobson Richardson, one of the most influential architects of the 19th century changed the course of American architecture with the introduction of an architectural vocabulary known today as the Richardsonian Romanesque. This new vocabulary was rapidly copied and imitated during the latter part of the Nineteenth and well into the first part of the Twentieth Century in America, Canada and Northern European countries. H.H Richardson as a designer did not limit his genius to creating architectural masterpieces, indeed “no feature was too small, no object too simple to engage his thought[i]” as his contemporary and biographer Mariana Griswold Van Rensselaer notes.

Richardson as an architect became intimately involved in every aspect of his buildings, from the interior detailing of the woodwork, to the built-in and free standing furniture. H.H. Richardson once said “I’ll plan anything a man wants from a cathedral to a chicken coop[ii].” Richardson was influenced by a variety of sources including medieval furniture, 17th and 18th century American furniture, the Queen Anne, William and Mary and Chippendale Style, also Eastlake Style furniture and the English Arts and Crafts Movement. Richardson owned a copy of Talbert’s Gothic Forms Applied to Furniture, one of the many pattern books highly popular with architects, designers, and craftsmen of his time[iii]. As an architect, Richardson had a collection of photographs which represented a wide range of styles, from the Gothic to the Renaissance, Baroque, Islamic, Asian, Egyptian, Mexican and Pre-Historic structures[iv].

The furniture of H.H. Richardson was “integral with the interior woodwork of the buildings.[v]” As an architect and furniture designer, H.H. Richardson collaborated with the best designers and craftsmen of his times including Francis H. Bacon, Charles Coolidge, and Stanford White, a partner in the firm of McKim, Mead and White, architects of the Boston Public Library. The prestigious furniture makers and carvers at A.H. Davenport and Company[vi] who later in 1916 merged with Irving and Casson executed most of Richardson’s furniture commissions including the Court of Appeals in Albany, New York, the Crane Library in Quincy, the Billings Library in Burlington, Vermont and the Converse Libraries in Malden[vii]. 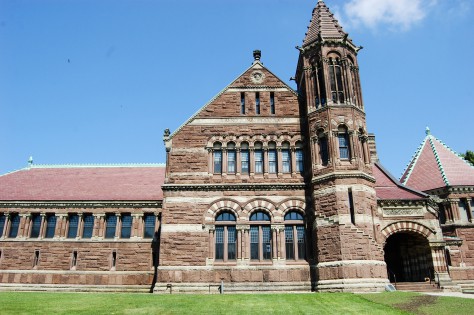 Richardson’s furniture designs follow the individualistic character of his buildings and at the Woburn Public Library, one of his most ornate, the furniture emphasizes the “simplicity and unity of design, structural integrity and honesty expressed in the use of materials.”  The furniture is as massive and robust as the buildings. The structural integrity of both the chair and the building is emphasized in the chair through the joinery and in the building through the vertical and horizontal lines.  John Ruskin in his book Seven Lamps of Architecture[viii] advocated for a simplicity and unity of design which is expressed in both the architecture and furniture of the Woburn Library. With a desire to bring back the “craftsmanship of a bygone era,[ix]” the furniture of the Woburn Library is medieval in inspiration in the sense that their scale is massive like medieval furniture which was made out of stone. The spindles recall the turned furniture of seventeenth century New England and shows characteristics of William Morris earlier furniture designs as well anticipate the furniture designed in the American Arts and Crafts Movement[x].

Most of the furniture of the Woburn Library was put together without the use of nails or screws, mortise and tenon joints are not only used to construct the furniture, but also to serve as the ornaments themselves. The same could be said for other Richardson designed furniture.

H.H. Richardson sought inspiration in the past in order to design timeless pieces of furniture which took on the characteristics of his buildings. His chairs and benches are as massive as the architecture, and as inviting and comfortable as his interiors are. By the time of his premature death at the age of 48 (died in 1886) Richardson had fully developed a complete vocabulary in furniture which anticipated the Modern movement. In the words of Richard Randall, Jr. who organized the first and only exhibition of Richardson’s furniture at the Museum of Fine Arts in 1962, “the variety seen in the existing examples, the drawings and photographs reveal the sanity, power and urbanity of the designs, and place Richardson among the masters of 19th century furniture design.[xi]

*** If you’d like to see the sources of the citations, please send me an email.  While conducting research in 2008-2009, I came to the realization that most of the furniture Richardson designed remains with us today and in great condition. The same cannot be said of his contemporary, the Philadelphia architect Frank Furness who also designed furniture for his buildings, but very little of it remains (shame! shame! shame!).  For the sake of clarity and length, I’ve decided to limit this post to just a certain pieces at the Woburn Public Library.